Joel Pace taught me everything I know about Stand Up Comedy. At least that’s probably how he’d describe it. 🙂 But for real, this guy did so much for me and my comedy. They say you can’t teach funny, and maybe that’s true, but I went to comedy school with Joel and one of his associates, Len Kure, and they made me a much better comic.

On the very first day I met Joel, I asked him if he’d be willing to be on my podcast. He said he’d be glad to. 9 months later… boom! It happened. And that’s how it is with Joel. He’s busy, but sincere. I’m pretty sure he believes the best love is tough love, but that tough love is real love. I’ve never seen him with his own kids, but that’s how he raises his comics. What’s obvious about knowing Joel is that he truly does care and he wants to fill the world with funnier, more successful comedians. 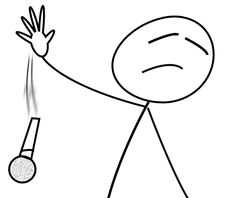 I think the most profound takeaway for me from his class was realizing how much of what I’d learned in 16 months of performing, he was able to teach me in the first 3 hours I knew him. I think most post people would agree that you don’t have to go to comedy school to be a comedian, but if you could shave several years of failure off your learning curve, wouldn’t you want to do that? And this is what comedy school offers, in my opinion, and Joel’s door remains open long after graduation night ends.

In the months since graduating from Joel’s comedy class, I’ve had several on-the-phone counseling sessions with Joel, emails punching up and trimming my jokes, and some much-needed counseling regarding a show at one of my venues. Joel understands the business of comedy, and more importantly, he loves it. If you ever get a chance to study comedy with Joel, take it. And in the meantime, I think you’ll enjoy this podcast.

P.S. This is the first time I’ve ever done a podcast with a live studio audience. They weren’t invited, by the way, they just came in and they stayed. I guess because Joel didn’t want to be alone with me. It made everything even better.