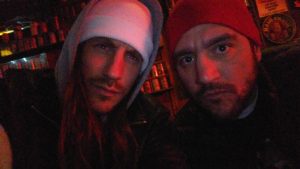 Kelly Kreye and Dale Krupla are two of the funniest dudes I’ve met in a long time. They’re traveling across the country filming Season 2 of Dave Made Me Do It — a documentary style YouTube series about the various open mic comedy scenes in America. When they decided to add Asheville to their itinerary, I was quick to jump on board. I arranged for us to be able to shoot at The Southern, Asheville’s longest running weekly open mic comedy show. Sula was with me that day, so she was quick to sit on my lap and steal the show. We shot about 15 minutes with her and 30 minutes without her. They didn’t use a single frame that didn’t include Sula. Welcome to my world! You can watch Sula upstage her father and outshine us all in S2E2 of DMMDI (video below!).

Dale & Kelly are traveling light, living on the cheap, and couch surfing their way across the country. Once I confirmed for myself that they were decent dudes, I offered them my guest room for the night. They rolled in pretty late following a series of after-hours misadventures around Asheville. I tricked them into doing my podcast by making them an offer they couldn’t refuse: Pancakes. What ensued was 3 dudes having the kind of conversation they probably would prefer wasn’t being recorded. But it was! And you’re going to love it. My mother, most likely, will not.

I wish these guys a lot of success with their comedy and film projects. I loved meeting them and Happy to say that Kelly and I still keep in touch. Both are welcome back to my house, table and podcast, any time they want.