I can’t say enough good things about The Tennessee Tramp.

First of all, she’s funny as hell. So if you ever get a chance to see her perform, you should take it. I even sent my mother to see her perform when she came to Tucson, and the two of them ended up meeting for lunch the next day! My mom actually knitted her a custom designed Pussy Hat with leopard skin ears (to match the leggings Janet wears on stage). But I think she decided that she liked the hat so much, she kept it for herself.

Apparently Janet said a lot of nice things to my mom about me, but then swore her to secrecy, so I’d never know what they were.

The thing about Janet is that she’s very unassuming. You wouldn’t imagine, when she takes the stage, the words about to come out of her mouth. At first glance she looks like someone your grandmother might play bridge with. But don’t underestimate this Trailer Park Queen. She’s smart as a whip and she owns the room from the moment she makes her appearance. She plays with the audience, taunts them even, and never loses pace with her routine. 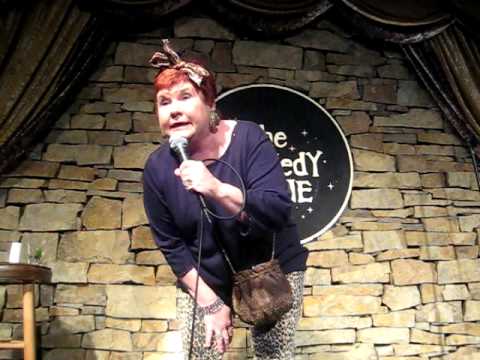 On a personal note, Janet has been very generous with me. She’s shown genuine interest in my growth as a comic and as a person. We’ve only met in person just the one time! But I hosted her for a couple of New Year’s Eve shows and we became fast friends right away. I was thrilled when she agreed to do my podcast.